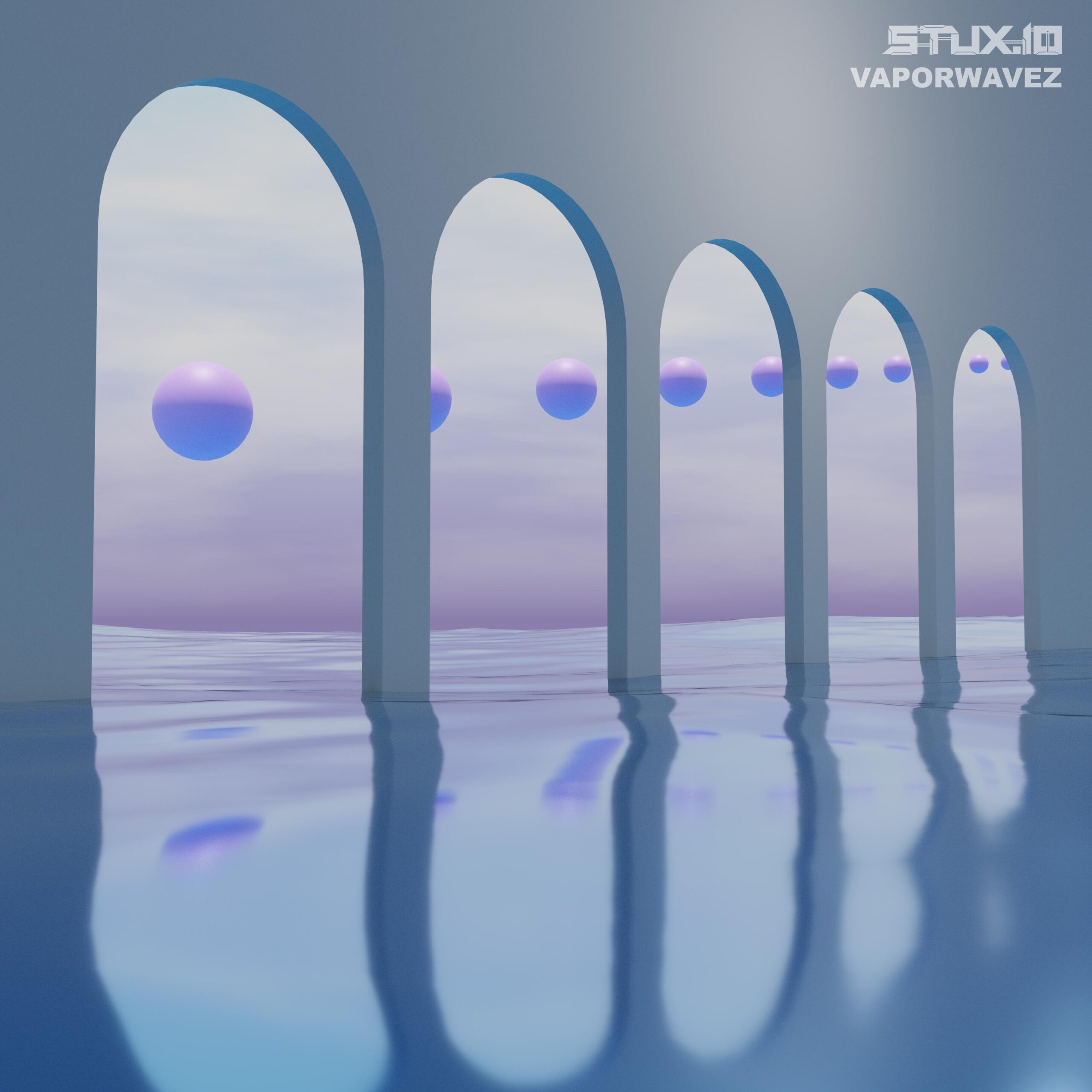 That’s right! My first full length album is now here! This album is the most ambitious project I’ve ever embarked on, so I wanted to take some time to really go through each track and give a little guide on what to listen to. There is a LOT packed into these tracks and I feel like the guided discussion will really bring out more of the musical nuances that might be hidden just below the surface.

The concept of this album has to do with creating Vaporwave fusions with various different genres from around the world. Quantum Superposition is a concept where a physical system that has multiple states, can be in a new state that is a combination of multiple states at once. The idea is that there is this “Vaporwave” state, plus a fusion of another state, like Cumbia, and we can be in Vaporwave state, or Cumbia state, but most of the time we are in some combination of the two, but the split isn’t necessarily 50/50 and doesn’t stay 50/50 throughout the song.

Each of the tracks will explore a fusion with a different genre, or present a musical idea that gives each track a unique flavor. I do not sample any other tracks, instead I re-create the aesthetics of the target genre and blend them in and out of a vaporwave framework.

Keep your ears open, there are lots of cool things going on from weird harmonies to slowly evolving synths. Almost nothing repeats exactly, subtle variations everywhere!

This edition will be on all major streaming platforms and include a total of 13 tracks. Full res 24 bit wav, or highest resolution available per platform.

This one is a bit interesting, and will be my first physical release. This one includes 2 mp3 tracks at a whopping 32 kbps stereo! That is like SUPER low res, but that’s all that will fit on a 1.4 MB floppy! They literally sound like they are underwater. I listened to them a few times on loop and I actually like it, it reminds me of like something you would download on Napster in the 90’s and it sounded terrible but you put it on a mix cd anyway. Will be for sale on Bandcamp, and include download codes for the premium deluxe edition.

This track is one of the first singles I dropped from the album, and very chill. It has lofi and soul vibes. It has layers upon layers upon layers which give it this super thick wall of sound. It dense with so much ear candy, but at the same time, none of the background layers stick out too much. In the mix, there are groups of instrument types, like arps, and percussion which are compressed fairly heavily.

This is a fun one! It’s a fusion with Reggaeton. What makes this track cool is that it differs from standard electronic rhythms, which are typically kick on each quarter note, and snare on 2, and 4, and replaces it with a super syncopated pattern.

What I really like about the Drum pattern is that the snare is syncopated sometimes by a dotted 8th and sometimes by an 8th. Besides the main pattern, most Reggaeton songs play around with little snare roles or snare mini patterns over the main 4. I make a few different snare variations across the track.

I knew from the beginning of the album I wanted to do a traditional vaporwave/slushwave track, which essentially is like found art, with some detuning and reverb. I had been testing out slowing down and pitch shifting different tracks, and I found that I like the sound of when fast temp tracks are slowed down. So this track actually is another track on the album but slowed down, pitched shifted, reverb-ed, and wobbled a little bit. Can you guess which one?

The plan early on was to do more fusions with world music, and I wanted to explore some combinations with latin styles. This one is a fusion with Cumbia, which is a dance music from Colombia.

This track features some jazz fusion lead guitar sections. You hear the first one right at 0:41. I like doing these kind of half funk/ half fusion guitar tones where they are clean, but kind of plucky like a funk guitar too. I did this one on the Universe on the front pick-up split to a single coil.

This track is a vaporwave take on 70’s disco. Inspired by Bee Gee’s style rhythms. It’s got lots of layers of guitar, and real bass. This is the first track I play the violin on, so its not a vst. The trick is to layer guitars with some palm mutes. Each one only does a little bit, and they kind of fit together like a jigsaw.

The bridge does a little fun part where we stay on the minor 1 chord, then drop the root note and go down chromatically. It ends up being harmonic minor, but while keeping the top two notes of the minor triad fixed, it creates an augmented chord.

The name says it all with this one. It’s a Tango! The Tango is a dance from Argentina, but has roots from a bunch of different places. It has 2 basic rhythms.

You can hear the tango rhythm in the bass line throughout the track. The keyboard plays the counter melody. If you listen carefully, there are subtle variations as the track progresses. THEN comes the dance. you’ll know it when you hear it, the straight up dance section comes in right before the chorus. If you listen closely, the second tango part uses a different rhythm. Can you tell which is which?

This one features some sexy high-gain guitar lead parts, coming in at 0:51.

The first dance part comes in at about 1:13. Chromatic passing tones galore. This one has got some cool back and forth call and response between the Bandoneon and Serum, where they trade some lines, and then converge at the end.

This one is like a 90’s soft rock/smooth jazz track with some interesting harmonies. This one has some cool harmonies where it gravitates to a more phrygian sound, but with mixture chords as well. The main progression is:

Where the chord analysis is :

Chord 3 is a type of a tonic function, but it never actually hits the root note.

Growing up in the 90’s, my mom had tons of workout VHS videos she would play at home. They were SO corny and they always had the goofiest background music which was usually all samples, and at the time, most of them were probably FM synths and had that really fake plastic sound. This track tries to capture some of the magic of those early VHS workout videos with a high energy rhythm, goofy FM horns, and funky bass line.

During the bridge almost coming back to the ending chorus you will hear a Neapolitan chord! Its not exactly the way its done in classical but its bII chord. The Neapolitan chord was originally used as kind of a setup for a cadence, but since I mostly don’t like the sound of hard cadences, the tension from the flat 2 is enough for me so I just jump right back into the tonic. It does give it a very cool flavor though because I use a Major 7th chord so the 7th is already the tonic, so it sounds like it kind of comes out of nowhere, but the 7th still anchors it back in a bit.

Intermission is one of my favorite tracks because it’s kind of like making fun of itself as if the album is a caricature. This one happens to be a Bossa Nova, and the chord progression is really fun. Did I mention I like chromatic passing tones? Because I love chromatic passing tones. Both in the melody and in the harmonies they are all over the place. You don’t hear them very often in pop music anymore, but it gives it some of those mid century vibes.

This one is my obligatory Vaportrap song. Vaporwave and Trap has been a common fusion for quite some time, and I wanted to give it a go. The fun part about trap is the high hats. The high hats typically play repeated eight notes, then throw in some faster subdivisions. You can have lots of fun doing triplets, sixteenth note triplets, or anything else.

The other fun part about Trap songs is the 808 bass. I did this one using Serum with a slightly offset sine wave and a TON of distortion so you can hear it on small speakers. What gives the bass some bounce is a little pitch automation mapped to an envelope.

This one is one of the more upbeat tracks on the album, and a fusion with 70’s style funk. Its got a lot going on, lots of instruments doing all sorts of different things.

This track uses the traditional Japanese scale Hirajoshi, which is a pentatonic scale. It uses some traditional Japanese instruments, along with some 80’s sounding ones, like acid bass. This is one of the slower moving tracks, since a lot of them move fairly quickly, I wanted to create contrast by letting this one breath a little. This track also does not contain chords based on triads, all the harmonies only use notes from the Hirajoshi scale, some of them do end up being thirds, but not always.

Epilogue (See you in my Dreams)

One of the interesting things about the pelog scale, is that it has 3 notes, a half step apart. This isn’t common in Western music. Typically instruments wouldn’t play all three in a row, they use subsets of 5 notes, but I found it interesting to play around with this feature and come up with some harmonies that sounded super lush.

By the time the track is reaching the climax at the end, the energy level is just off the charts. Right as the final chorus hits, and the lead synth comes in it just goes even higher. What I find is that it feels like you are both going to sleep, and going into space a light speed, at the same time. That last chorus is meant to invoke vivid imagery of heading off into some sort of infinity.