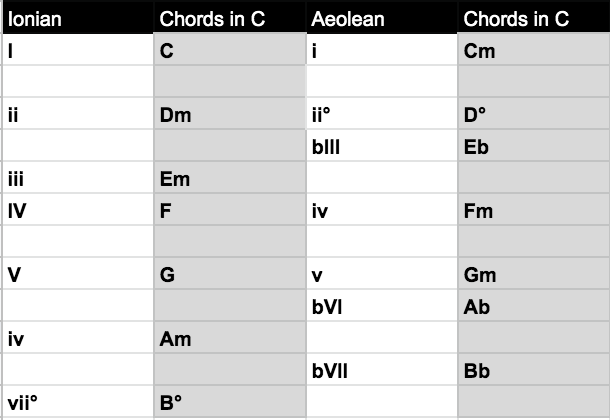 Modal mixture is a common technique in Jazz and Classical, and even in video game and music scores, but often overlooked in electronic music. Most electronic music revolves around diatonic harmony, meaning harmonies derived only from the 7 notes of the major scale.

What is Modal Mixture?

Mode mixture is simply mix and matching harmonies from a parallel mode. The most common method is to line up the parallel major and minor modes (Ionian and Aeolian) and in the major key, borrow the chords from Aeolian. This means if we are in the key of C major, we can now borrow chords from C minor.

There are some notes overlapping, but not all, and the parallel minor chords result in 7 brand new chords to spice up any progression! These take a little more finesse to fit into a progression, but they provide some very interesting harmonies. The idea is the create a chord progression using chords from the second column, then sneakily throw in, or swap one chord from one of the available chords on the 4th column. This expands our pallet of chords from 7 to 14! Each one takes practice to figure out where it best fits. It takes a lot of tinkering to fit them in, but it’s very satisfying when you get them in just the right spot.

This expands our pallet of chords from 7 to 14!

One of the important things for creating progressions with mixture chords is to make sure that the naming convention makes sense. For example, C minor is the relative of Eb major, so chord names should be using flats, and in the list of chords, each letter name should only be used 1 time.

If we look closely, we see that there are actually 3 new notes, the minor 3rd, minor 6th, and minor 7th. The root, 2nd, 4th, and 5th are the same between Aeolian and Ionian.

Writing about music theory is cool, but seeing and hearing examples is where it all comes together.

Let’s take a look at the track “Icicles”. The main progression is

So the progression is kind of in C minor/Eb major but we get an extra chord GbM7 which is borrowed from the key of Eb minor. When ends up happening is that the progression sounds like the tonal center is kind of not exactly C minor, but also is. It blends in fairly well and doesn’t sound like an out of place chord.